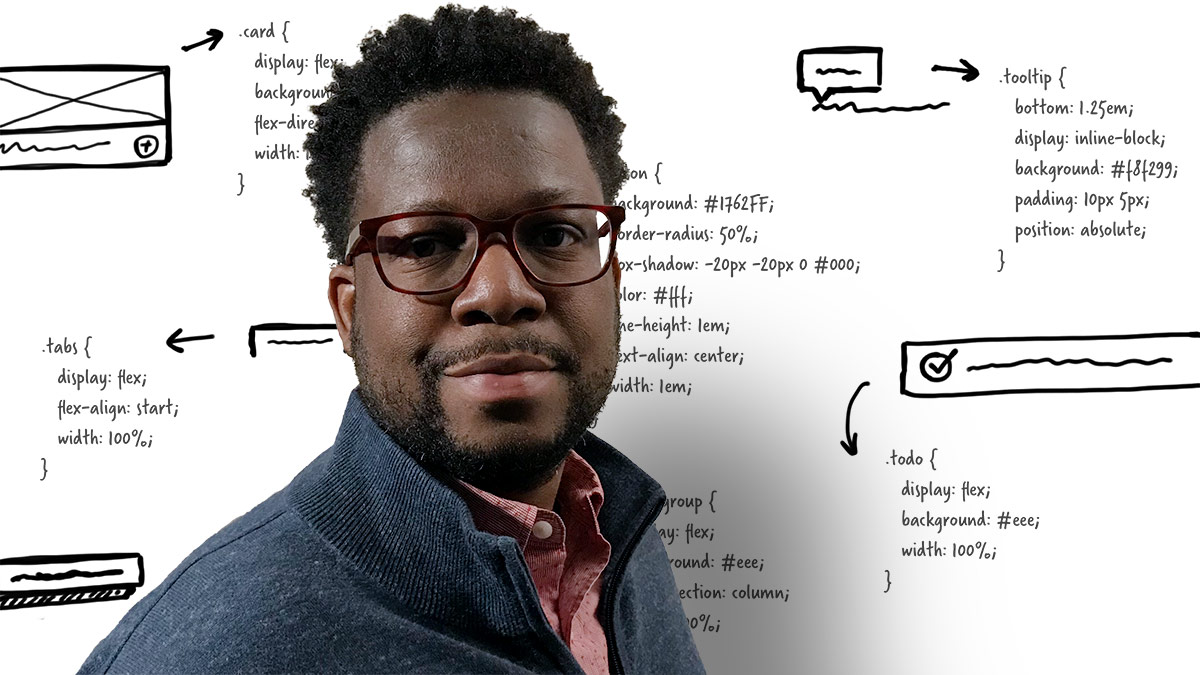 I'm Ezekiel "Zeke" Binion, founder of Code for Designers and an independent product designer with over a decade of experience in design and development.

Phew … that's a mouthful of a sentence. Let me try to unpack that a bit.

I've had a wide range of job titles over my the course of my career from intern to senior online producer, from UX manager (ironically, not a management position) to Director of UX (an actual management position). But those titles hardly explain what I do.

Most simply put, I'm a maker. I love turning ideas into reality and I use tools like user research, planning, design, and development to do just that for websites and applications.

My unlikely path to teaching

I was born and raised on Chicago's Southside. I've been an art and design nerd for as much as my life as I can remember.

One of my lasting memories of my grandmother was her knitting dresses for the dolls that she would sell at the church fair. My grandmother had 6 children. Most of them showed some artistic ability. One of my uncles creates elaborate sculptures and paintings, another was a pianist that could play music by ear, others did woodworking and carpentry, beadwork, or illustration.

My childhood is filled with memories of artistic makers. My love of making is the most cherished gift I've received from my family.

Before I went to high school, I thought drafting and architecture were going to be the ways I would use my creativity. After all, Chicago's known for its architecture. So I started learning it in the 8th grade and participated in state-wide competitions.

It was a pretty cool experience but it wasn't for me.

When I made it to high school. I took nearly every art and technology class that was available. The one that stood out the most, was this amazingly wonderful class where I got to play (and it really did feel like playing) with everything from 3D animation to packaging design.

During that class, I had an opportunity to create my first website and I was hooked. There is something amazing about the immediacy of the web – being able to have an idea, create it nearly instantaneously, and have people use it is just incredible.

Sadly, I started college before I knew designing things for the web could be an actual career. So I went to Columbia College in Chicago to obtain a BFA in Graphic Design.

I thought I was going to be a brand or marketing designer. But even as I tried to break into Graphic Design, I continued making websites.

When I met other designers, we often chatted about the things we wanted to learn. While working overnights at Kinko's I met a designer that wanted to learn web development because it would help her in her career. My passion for helping people kicked in. So much like the high school class did for me, I showed her a few things that I knew. It turned out, that a job recommendation from her lead to my first job designing on the web.

A few years into my professional career I took a course at Starter League, one of the first tech boot camps in Chicago. I had been working professionally for a few years in the field, but having no formal training in research or development left me wanting to know more.

Afterward, that feeling of wanting to help others gnawed at me again. When I left the class, I decided to become a mentor for people going through the program.

From there, the opportunities I found to teach and mentor others continued to grow. I've spoken in classrooms at tech boot camps and universities, co-organized Chicago's HTML5 Meetup, and spoken at Chicago Camp's UX Camp.

One of the most impactful opportunities I've had to help others was by being a guest speaker for Citizen Schools. Through the program, I had the opportunity to go into a classroom on the Southside of Chicago and teach kids about design and technology.

While I was speaking in the classroom I thought to myself, wow … this is just incredible.

I realized the difference I could make in someone's life by exposing them to new ideas, giving them an opportunity to explore them, and providing them with support and encouragement along the way.

After that experience, I sought others way to make that kind of impact. A friend pointed me towards the direction of Street Level Youth Media, a media-arts non-profit in Chicago.

It was there that I developed my first course, a 10-week program that taught basic UX skills by designing board games. The program culminated in a round of play-testing (a game design concept that's similar to usability testing) at Chicago's Annual Toy and Game Fair. (Don't worry the group took plenty of breaks to tour the festival.)

Working hands-on with the group was an incredibly rewarding experience. I really loved doing it but I wanted to do more. I also wanted to find a way to continue contributing while respecting my own need for a personal life (something that's incredibly difficult to do while working a full-time job and volunteering in my spare time).

Why teach coding skills to designers?

Throughout my experience mentoring other designers, no matter who I was working with, 1 question consistently came up.

"Should I learn how to code?"

There's a lot of misconceptions about what having development knowledge does for you as a designer, especially as a UX designer. There are so many articles about whether designers should learn to code, that it could be its own section of the internet.

How much code should a designer learn?

Does learning code make you less likely to explore ideas that you can't code yourself?

A quote from Jonathan Ive, Apple's Chief Design Officer, may sum up my thoughts the best.

"That's just tragic, that you can spend four years of your life studying the design of three-dimensional objects and not make one."

"That's just tragic, that you can spend four years of your life studying the design of websites and applications, and not make one."

As a Graphic Design student, I learned how to press ink, develop film, create 3D sculptures from foam and wood, paint, illustrate, and create fonts by hand. Although I wasn't likely to use any of those skills in Graphic Design, it indirectly informed how I approached design.

Truthfully, it's possible to create great designs on the web without knowing any code. But knowing how to create things in the medium you're working in, gives you a more intimate understanding of it and informs how you work.

That's why I started Code for Designers.

There is so much power in being able to use your creativity to make something from nothing. I want to share that ability with the world and empower more designers to create things for themselves.

For many designers, learning to code isn't about becoming frontend developer. Perhaps the thing you want to make is a prototype. Maybe you want to create a website by hand, or just modify an existing template to better suit your needs. Possibly, you just want to make a quick demo that gives you the ability to understand the new web and mobile technologies.

Whatever your use-case is, my goal is to inspire you to make the web a more interesting place.